Lost amid the Obamamania at Pajamas Media, I have a new piece up on the revelation that £20,000 of BBC charity money ended up in the hands of the terrorists who bombed London in July 2005. Accidents can happen, but the episode is an inevitable consequence of the BBC's softly-softly attitude to most things Muslim. You can read it here.
Posted by Mike at 3:22 PM No comments:

Your choice is simple: join us and live in peace, or pursue your present course and face obliteration… 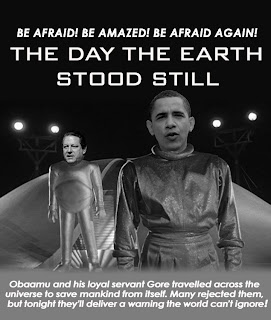 "Remember, if anything should happen to me, you must go to Gore and say 'Obaamu barada nikto'."

Click on the image to see the full-size version.
Posted by Mike at 1:19 PM No comments:

I have a piece up at Pajamas Media on the summer camps for youngsters in Gaza being run by Hamas and Islamic Jihad, at which children are religiously indoctrinated, taught to hate the US and Israel and glorify violence, and otherwise abused.

It’s that time of year again: school’s out, the kids are under your feet, and, much as you love the little brats, you find your patience being tested. Eventually, after clearing yet another dirty plate, or tripping over a discarded sneaker, you give them a well-deserved piece of your mind: “Why don’t you get out of the house and do something useful, like memorize the Koran or learn how to fire a shoulder-launched rocket?”

You can read the whole thing here.
Posted by Mike at 2:03 PM No comments:

Empty T-shirts for an empty suit

The vapidity of Obama's 'youth appeal' is splashed across two pages in the Review section of today's UK Observer newspaper. The piece is online here.

The main article, by Amy Larocca of New York magazine, rehashes all the well-worn points about Obama's popularity among young people – the endorsements by pop and movie stars, the 'cool' factor, his mastery of the internet and so on (although Larocca neglects to mention that the McCain campaign has recently enjoyed great success with its web video ads).

Nothing new there, even for British readers. Lines such as 'Obama understood from the start how to use the net' aren't exactly piercing political insight.

Accompanying the article are photos of seven suitably hip young Americans, wearing Obama T-shirts and photographed against authentically 'grungy' urban backdrops. And beside the photos are 'vox pops' in which they explain why Obama appeals to them.

The interviews are littered with the usual references to hope'n'change, and the vaguely articulated belief that Obama is, and will be, 'different' in some way. (Interestingly, the only one of the seven who's slightly skeptical about Obama says that, while he's supportive of his candidacy he's actually voting for Ralph Nader.)

Facts, and an acknowledgment of reality, are conspicuously absent from the testimonials. Jordana, 24, says: "For America to be this beacon of democracy it always says it is, it needs to acknowledge its flaws, look to other countries as models and build up from there."

Viola, 23, thinks Obama "has a new way of dealing with other countries without looking only at American self-interest". Sei, 18, says: "I saw Obama on television saying that you don't necessarily need experience if you have belief, and that sometimes experience can cloud your vision. I thought that was interesting and cool."

But my favourite Obamaniac is Tony, a 30-year-old… wait for it… community organiser! Tony is a Che Guevara wannabe who, in his peak cap and combat jacket, could also pass for an Obama action figure, and here's what he has to say about the man who's clearly his role model:

"I wear the T-shirt because I admire Obama's forthright and genuine rhetoric; he is just cut from a different cloth from most politicians. After everything that went down in Florida in 2001 I was very cynical about the whole political process. He has revived hope in me as well as others."

Got that? Tony, who professes to be 'cynical' about politics, admires Obama's forthright and genuine rhetoric. It's clearly lost on Tony that rhetoric is, by its very nature, anything but forthright and genuine. Tony is also frightened by the 'threat' from people who might be resistant to the 'change' Obama would bring about.

Tony wears his ignorance like a badge of honour.

Read the whole thing, and shudder at the naivety, and outright stupidity, of some of the people who will be voting for Obama in November.

Update: Thanks to Ace and JWF for linking. Also Dan, who highlights a few more examples of youthful ignorance.

Terry in the comments points out another howler from Tony that I missed – he thinks the Great Stolen Election was in 2001. Or perhaps he turned up, stoned, at the polling station in November 2001 and was told there was no election – it might explain why he's so cynical.

If they ever introduce a basic intelligence test as a prerequisite for being allowed to vote, the Dems will be truly screwed.
Posted by Mike at 12:30 PM 6 comments: