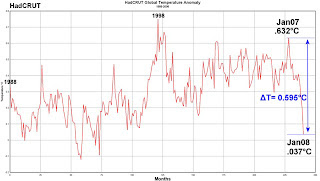 Click image for full-size version
Someone get Al Gore on the phone, and tell him that debate he keeps saying is settled has just been blown wide open again.

And now data released by the four major temperature monitoring centres is showing that global temperatures fell by an unprecedented amount – more than half a degree Celsius – over the past 12 months.

The total amount of cooling ranges from 0.65C up to 0.75C - a value large enough to wipe out nearly all the warming recorded over the past 100 years. All in one year's time. For all four sources, it's the single fastest temperature change ever recorded, either up or down.

'But hang on', the alarmists will say. 'Remember that a couple of years back, when we realised that global warming wasn’t keeping pace with our predictions, we started to talk about ‘climate change’ instead, and ‘climate change’ doesn’t necessarily mean hotter; it can mean colder, wetter, drier, or anything else we want it to mean.'

That’s true. But when they say that they’re talking about localised extreme weather conditions, all of which they claim are ultimately caused by steadily rising global temperatures, which in turn they claim are caused by rising CO2 emissions. Nowhere in the alarmists’ spin book is there provision for an entire year of such dramatic cooling over the planet as a whole. And last time I looked, those CO2 emissions were still increasing.

Why isn’t this huge news? Why isn’t this everywhere? It’s on many of the ‘skeptic’ blogs and websites, but it’s apparently yet to be picked up by the MSM.

We know why, of course. Too many environmental groups and trans-national bureaucracies, along with their lackies in the media, have too much invested in the biggest hoax of all time to admit that the game is up.

The BBC, for example, which has been acting as the unofficial PR outfit for the alarmists for years now, is far more interested in publicity stunts by environmental protestors (see this post, and they’re at it again today), than reporting evidence that pretty much proves that the threat the eco-warriors are protesting about doesn’t actually exist.

If the cooling continues eventually even the alarmists won’t be able to ignore it. And then they’ll either claim it’s down to ‘feedback mechanisms’ that we don’t fully understand (despite the fact that the 'science is settled') or they’ll tell us that this is exactly what they expected to see – some kind of correction before the runaway warming begins in earnest (hang on – they’re already doing that).

Maybe the International Conference on Climate Change, which opens on Sunday in New York and features many of the leading ‘skeptics’, will be able to get this development the coverage it deserves, although environmental groups are already spinning against the conference, and it won’t be a big surprise if the media largely ignores it.

Slowly but surely, however, the tide is turning, and eventually the alarmists’ position will become untenable. And when it does, someone will have to decide what we should do with those who have spent years abusing science and distorting truth for financial or political gain. Nuremberg-style trials anyone?

More at JammieWearingFool and Say Anything.
Posted by Mike at 1:42 PM

The Thunder Run has linked to this post in the - Web Reconnaissance for 02/27/2008 A short recon of what’s out there that might draw your attention, updated throughout the day...so check back often.

I'm also here from the Thunder Run. Great informative post. Unfortunately the facts won't convince many of the GW devotees.

These are all websites that prove you wrong. Note that 80 feet of the Columbia Glacier of Montana is melting every day. Alaska is experiencing a temperature increase of 5 degrees in the winter and 10 degrees in the winter. Computer models are extremely skewed unless they incorporate human activities. You should also note that the United States emits 6,200 megatons of greenhouse gasses a year. What will explain for your global cooling, is the second culprit, global dimming. Just like clouds, aerosols and other pollutants, and contrails block out the sun. This causes less evaporation, more flooding and other things. NASA has come forward by saying that both global warming and global dimming are happening. Global dimming masques global warming, because during the 9-11 grounding, the temperature range increased and decreased when planes began to fly. You should get your facts write next time! I can go on, but you should prove yourself wrong yourself. Don't be ignorant, it shouldn't be a political issue. By the way, the greenhouse effect is a normal cycle in which sunlight hits the ground, which creates infrared radiation and trace gasses like (water vapor, nitrous oxide, CFC's, aerosols, carbon dioxide, methane, etc.) trap in the heat. With more trace gasses, more heat is trapped in, increasing the temperature.

To the poster directly above me. I went through your Irrefutable evidence and came to realize that most of the facts you list are dated. That's right, they are mostly old quotes that are meaningless in the present time. Also, it is impossible to use a linear regression using two factors, such as the increase in global temperature due to the increase in CO2, based on the fact that there are so many other factors which affect the climate. It is a ridiculous study and truly cannot be proven. Someone could just as easily make the argument that it rains less often because people are drinking to much water. haahaahahhaah

You cant say "in this area the temperature went up 5 degrees so global warming is real". You need years of data, trends and global data. not icolated. In my area we had warmer weather, a longer winter, and temperature spikes (spikes of 20 celcius overnight!!!!)